Top Chef headed back to Los Angeles for the 10 year celebration! The chefs were thrilled to come back to a familiar kitchen, some even called it “home.” The chefs shared that the whole traveling back and forth was annoying, but hey, it makes for some good road trip stories.

Padma explained that each chef would choose one ingredient. The catch, they would have 20 seconds to grab an item from the pantry and had to create a meal using only those assortment of ingredients.

If the chefs were smart, they would be logical about the items they grabbed. But in classic Top Chef fashion, it didn’t really play out like that.

Phillip went first and started off strong by grabbing a New York strip steak for the protein. Inspired by the choice of protein, Isaac did the same and choose a whole chicken, however that was also a protein. Not such a smart move Isaac.

“We already have a solid protein, why are you choosing another protein?” – Marjorie

The other chefs picked an assortment of items, some a little confusing, but enough to create a cohesive dish. Jason’s contribution of celery raised a lot of eyebrows asking why he would do that.

“There was a little bit of head-scratching,” Jason said, “but I bet you everyone is going to end up using celery in their dish.”

And to everyone else’s surprise, Jason was right.

Antonia picked Jeremy for the win for yet another raw meat dish. Jeremy served a raw shaved cut of beet with a mushroom and crisp garlic vinaigrette.

Now for the Elimination Challenge, Padma told the chefs to think back ten years. To commemorate the passage of time and the ten year anniversary of Top Chef, the chefs had to create a culinary dish explaining who they were ten years ago. Marjorie was a new culinary school grad, Jason was a manager apparently yelling at everyone in his restaurant, and Kwame was trying to forget where he was ten years ago.

“This was the point in time where I was starting to drift away from him, because our viewpoints were, like, totally different … It’s not really a memory I try to go back to.” – Kwame, speaking about his father.

Back in the kitchen the chefs were hard at work. Jeremy was cooking lobster ravioli and king salmon dish explaining that ten years ago he helped his mother find her birth mother. When they found each other, they cooked a lot of pasta. Isaac’s dish was inspired by his evacuation during Hurricane Katrina, making gumbo for the occasion. Amar went the sentimental route explaining that his dish was homage to his former boss, Gerry Hayden, who has ALS.

“I want to show him that I still remember this dish, and I appreciate everything he did for me when he started cooking,” – Amar

Kwame could not find his vibe in the kitchen. Perhaps the bad memory of his father brought down his mojo. As if on cue, Kwame sliced his finger creating a bigger handicap towards his dish.

For this challenge it was definitely fitting that there were ten judges. The judges consisted of highly regarded LA chefs and former Top Chef contestants and past winners Michael Voltage and Mei Lin. 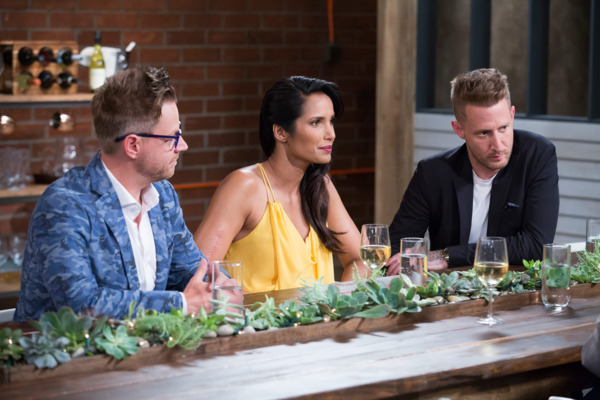 Highlights from the meal included Chad’s shrimp ceviche and tomato concasse and Marjorie’s green curry. Jeremy, Jason, and Phillip were lost in the past and all created dishes that should have never made it to the future. Phillip’s dish was way to acidic, Jason contradicted himself by under poaching his fish, and Jeremy’s seafood combo missed the mark. As expected from Kwame’s day in the kitchen, his dish fell short as well.

“This is just confusing the hell out of me.” – Tom, about Kwame’s dish

The top three were really not a surprise. Carl joined Chad and Marjorie for the best dishes of the night. It was no surprise when Marjorie took the win.

However, it wasn’t as clear which chef were going home. Phillip, Jason, and Jeremy landed in the bottom which allowed Kwame to barley get by. Phillip still seemed confused as to what the judges wanted and Jason dish made the judges think that he was not fully checked into the competition.

In the end Jason was sent packing, probably a good sign on both sides.

Next week, the chef’s take to Instagram to see who has the best plating skills.