Mumford and Sons have decided to ditch the banjos and acoustic guitars this time around. The band will release their third album titled, Wilder Mind, on May 4.

After a long hiatus from the recording studio, the band is back and like never before! Their sophomore album, Babel was a major success. This time around they have gone for a more electronic sound. They ditched the classic folk style music for U2-sized guitars, synths, and some drum machines. 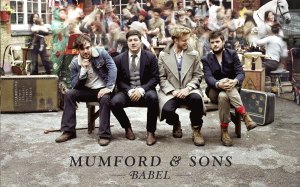 Frontman of the band, Marcus Mumford explained the change-up in a recent interview with Rolling Stones Magazine. He explained, “We felt that doing the same thing, or the same instrumentation again, just wasn’t for us.” Bassist Ted Dwane added, “We’ve got a broader taste in music than just that. None of us had really any interest in doing a sort of Babel 2. It was always going to be different.”

Not only will the sound be different, but the lyrics have also changed this time around. Mumford mostly wrote the two previous album while the third album was more of a collaboration. He explained, “The boys kept coming up with a bunch of amazing lyrics that I found really fun to sing.”

Mumford and Sons will be playing the touring scene in a few locations with the album out early this summer.