Goood morning, Top Chef! The two-night season premiere continued on last night, proving that this season is bringing the heat.

Bright and early the chefs were greeted by Ludo Lefebvre, the new world French chef who calls himself,  the “Impresario of Pop-Up Dining.” From here you could only guess where this challenge was going.

Padma announced that the chefs would be split into four teams with four chefs each. Teams would be responsible for creating a pop-up restaurant based on four different cuisines that could be found in LA. The four cuisines included Mexican, Persian, vegan, and Korean. The chefs would find out what they were cooking when they arrived at the pop-up.

The only chef that seemed confidant going into the challenge was Kwame, secret seasoned pop-up restaurateur. Before he could let that slide, Padma split up the contestants and the chefs were on their way.

The Orange team, Frances, Grayson, Renee, and Phillip, were assigned the vegan pop-up. Clearly, they were holding in the excitement because no one was too thrilled. “I’m really thrown off because we’re going to a place that has no ethnicity,” Phillip said sharing his so-called inside knowledge. “We’re going to White-People Town.” 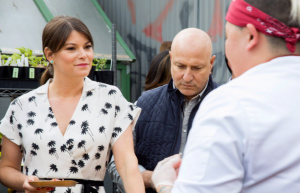 The Grey Team, consisting of Amar, Angelina, Issac, and Marjorie, picked Persian food. Although they were hesitant about the cuisine, they seem to have the most confidence as a team.  “What do I know about it? It’s um, like, um, nothing. I know nothing about Persian food,” shared Issac. However, they took great advantage of their ambassador and found out all they could about the cuisine.

The Purple team members, Giselle, Karen, Carl, and Jason were cooing Korean food. They all seemed pretty confident, except for Karen. Karen spoke every thought she had, making her just seem less confident. (And very lost, according to her fellow chefs.)

Last but not least, was the Blue Team with Mexican food. The team, Kwame, Jeremy, Chad, and Wesley, took little advantage of their culinary ambassador. (Spolier! This bites them in the ass in the end game.) However, they were all VERY confident. Chad told everyone that he has TWO Mexican restaurants so no one was to worry!

Overall there were no major mistakes, but the Persian team and the Korean team stood out the most. The vegan and Mexican pop-up simply did not deliver. Jeremy and Chad’s dishes fell short lacking flavor and proper cooking technique. The only bright side to the Mexican team was Kwame’s raisin-glazed shrimp with masa porridge and avocado lime cream. The vegan team and the Korean team had solid food, but nothing worthy of winning. Giselle was able to pull through with a solid Asian style chicken wing. Karen pulled off the most authentic dish with a grilled short rib and nectarine kimchi. The vegan team got lost without the meat, especially Greyson. While she claimed to be “uninspired,” it really didn’t look like she tried that hard to be inspired. Phillip even fell short, considering his overwhelming confidence. In the end it was Renee who really missed the beat. She was sent packing her knives, hoping to redeem herself in Last Chance Kitchen.

Overall, the Persian team took the win. Major highlights included Amar’s heirloom carrots with a cilantro pesto, and Angelina’s crispy chicken. The best dish of the night went to a rare sighting on Top Chef, a dessert. Marjorie was able to avoid the Top Chef dessert curse and make a yogurt mousse with pistachio sponge cake and an orange saffron syrup.

Next week the chefs take on more of the sunshine state. Hopefully, Greyson has the chance to redefine herself (once again) and get out of the bottom for good!